Exhilaration, Hope... and a Tiny Meltdown

It was a lovely morning. 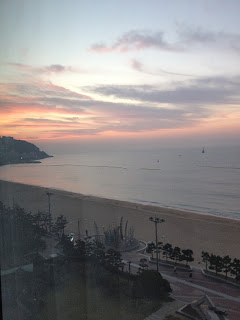 I was up and ready to go for the second day of the women's and men's pre-assembly. We began with morning prayer, and then had Bible study. Here is my Bible study group. 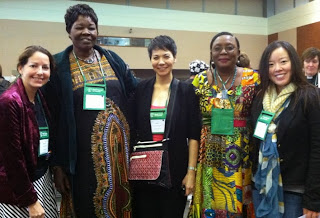 We then moved into reports back from yesterday's separate meetings of men and women. This was the best part of the day. The women, we had a good day yesterday. But the men had prepared a whole statement. I think there were only a few North American men and European men - the majority were men from the global South. It was an amazing statement: about the gratitude men felt to be in solidarity with women, for their own commitments to continue to work for gender justice, their own understanding of how the construction of masculinity in many cultures means many of their brothers face homophobia and hatred, and confessing their fear of the repercussions they would face for being in solidarity with women and changing their own behaviors. I know I'm not writing this as well as the men said it. I was surprised. I was expected a watered-down statement, and instead we heard something powerful.

I find it problematic when Americans say that men in other countries are so patriarchal and sexist (since the U.S. isn't doing so well at gender equality)... and today the men from other parts of the world totally showed us up. I was so grateful for their presence and commitments.

We exited for lunch to this. 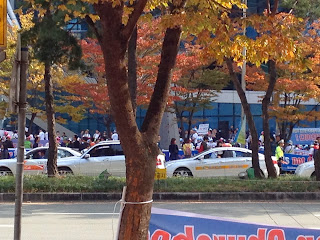 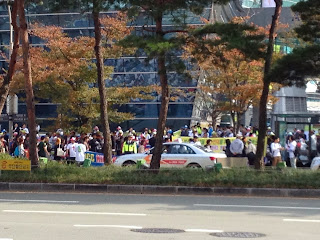 Yes, protests. I have to admit by this point I was tired and hungry (which is fairly typical of me, many days when I have all-day meetings). I know that we as Christians have lots of disagreements, and I'm fairly accustomed to seeing the Westboro Baptist Church picketing events I attend (PCUSA General Assemblies, presidential inaugurations). Here's an article discussing some of the disagreement among Korean Christians about the WCC. I'm not surprised; I think these issues show up in the U.S. among American Christians just as much. I figure there are people praying for my soul in these protests, and that can't hurt.

I did have a fun lunch (dumplings and more dumplings) with some folks from the United Church of Canada, and then we headed back to hear about trafficking and sexual violence. At this point, I had a meltdown.

Nowadays my meltdowns are more about checking out than emotional explosions. I realized I had expected this pre-event would be a time to get to know other women, but also to think together about strategic engagement on gender justice issues through WCC and other church mechanisms. We listened to a lot of talking heads, a lot of presentations. Our interactions with one another felt limited, and we didn't get to strategy until late in the day today. So I had a meltdown that included checking out just enough to continue preparing for my committee work, and leaving a little early to go to the grocery store (I'm practical about my needs even in a meltdown).

I know this is not my most helpful contribution. However, I do feel prepared for my committee's work, and I have had some amazing conversations with other Christians, particularly Korean Christians. I am very grateful for these interactions, because they are shaping my orientation to the work of the General Assembly in the next ten days. And a highlight of my day, besides the mens' statement, was going to the steps outside the convention center with hundreds of other participants in the pre-assembly for a group picture, with women from all over the world singing "We Shall Overcome." This, from women who had just been discussing trafficking of women and children, and sexual violence. There is plenty of hope here. I can't wait for tomorrow, for the beginning of the assembly.