A Note on Korea

October 26, 2013
This is my second visit to South Korea. The first was in 2005 to visit friends (Irene and Tahir) and travel around a little. I was traveling with Korean speakers (Mary, Irene, and Min, a pastor in Wonju), so it was extra easy to get around. I just came along for the ride, and I loved it. Besides meeting people, going to church (pretty much most of one Sunday), visiting cultural sites (beautiful and incredible - wish I could go back on this trip!), shopping, enjoying the mountains, and spending some time at a spa, there were the little things that made the trip even more enjoyable. Street markets that stay open late into the night, for instance. Fish for breakfast. Noodles and kimpap available on the street. I could easily reach the overhead handles on the subway in Seoul, whereas in D.C. or Chicago or New York, I have a hard time getting up that high.

Like most good Presbyterians, and like most who have attended a seminary, I have many friends who are Korean and Korean American. That, combined with my earlier travel to South Korea, and the fact that I'm an English-speaker, means this is a sort-of easy trip for me. Most signs have some English as well as Korean. I am familiar with much of the food available, and have no problem wandering around finding street food I can eat (I'm usually pescatarian, and can't handle much dairy.). 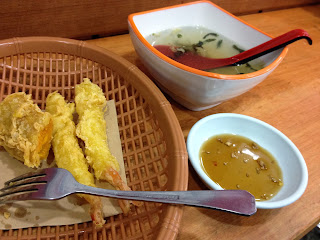 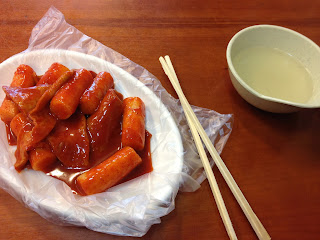 I'm looking forward to seeing friends who live in Korea (HyeYoung and Kurt, who are mission co-workers and seminary classmates), and to seeing others who are here for the WCC. There are spaces of familiarity here even though I will not be familiar with the vast majority of those attending this event.

Now, some of my Korean and Korean American friends point out to me with some frequency that Japan was brutal in its occupation of Korea, sometimes implying my responsibility in this. This does, as you might imagine, put me in an awkward spot. It's bad enough being American and also pro-human rights, given the actions of the U.S. in violating human rights at home and around the world. The U.S. has a large military presence in South Korea, and U.S. soldiers are frequent violent human rights abusers, particularly toward Korean women. The fact that we maintain bases here is not ok to me, although I'm sure the geopolitical situation is more complicated than I understand.

It is also true that during Japan's rise as a colonial power, my family left for the United States. One of my great-grandmothers was born in California in 1907, and the rest of my great-grandparents arrived during the teens. I identify much more with the U.S. and with Asian Pacific Americans in the U.S. than I do with Japan, given the generational distance (I'm fourth and fifth generation), my biraciality (I am also of eastern European Jewish descent), and because experiences of anti-Asian U.S. sentiment have been much more shaping for me than have Japanese culture and history. My experience of being Japanese American is about maintaining a strong blended identity of American-ness, Jewish-ness, Japanese-ness, and resisting racist discrimination and its effects.

A woman selling food by the beach gave me a look when I said I was American. I took that to mean that she didn't quite believe me because of my looks (this is a frequent problem I have when traveling in other countries - I don't look white, don't have blond hair or blue eyes, and I like spicy food, so I do not seem very American to some). I said my mother's family was Japanese, and she walked away. I know that just because my family wasn't in Japan, and spent a few years locked up in concentration camps in the U.S. for being Japanese, does not make much of a difference to a people who were systematically terrorized by a brutal and dehumanizing regime.

While I'm here, I know I will learn much more about the occupations of Korea, and the implications of U.S. military actions here. I will learn more about the work towards Korean reunification. I expect there will be many more awkward moments, as I'm not one to duck and try to pass myself off as not half-Japanese or not American.

Well, no one ever said life is easy. It is painful, and joyful, and difficult, and beautiful. Here we go...