Today began and ended with community.

I had breakfast with friends Mary, Dwight, HyeYoung, Kurt, and baby Sahn, which was pure delight. I don't get to see Mary and Dwight that often, which is mostly my fault, as I haven't been to Hawaii since their wedding in 2007.

I headed over to Bexco and found my Bible study room assignment (yes, this does mean I didn't make it to morning prayer... breakfast won!). I ended up in Bible study with the Young Adult Volunteers and Julia Brown-Karimu, who directs the Division of Overseas Ministries of the Christian Church (Disciples of Christ). Of course, it's just easier to go to Korea than see people in the U.S... 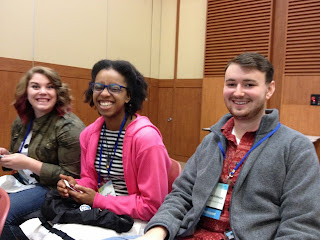 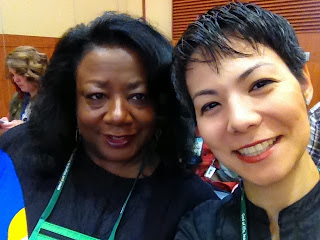 We did Bible study... It was remarkable mostly for the fact that it ended up being a good small group, with vigorous discussion. I snuck in some of Ted Hiebert's (McCormick professor and OT scholar) exegetical work on Genesis and the creation story (we're not just made of dust... we're made of the best dirt out there...).

I was very invested in getting to the morning plenary, because the Prime Minister of the Republic of Korea (Jung Hong-won) was bringing greetings and we had to go through metal detectors. 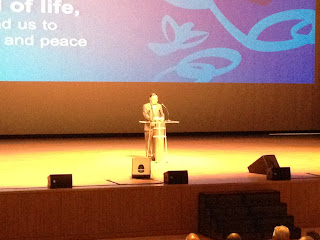 But the best part was the plenary itself. One of the presenters was Michel Sidibé, the director of UNAIDS. He was fantastic, arguing that transmission of HIV/AIDS will be greatly curtailed once we end discrimination against homosexuals, sex workers, and drug users, and also advocated ending discrimination against HIV positive individuals, including the travel restrictions placed on people by certain countries. UNAIDS also helped lower the cost of treatment from $15,000/year/person to $80/year/person. It was exciting to hear from him.

The presenter who really blew my mind was the Anglican Bishop of Colombo, Sri Lanka, Bishop Duleep Kamil de Chikera. He is really poetic, so that helps. But he was calling us as the church to accountability. Here are some notes I scribbled down:
-"Good News is articulated among heroes, chief priests, pharaohs of our time."
-"the essence of diakonia converges on prophetic transformation"
-"victim theology is the crucible in which peace theology marinates"
-"theology minus victims is a mutilation of the heart and mind of Jesus"
-"victim theology redefines the character of Christian community"
-"our assembly theme (God of life, lead us to justice and peace) is a moment of grace"

I think it was also this bishop who said we should declare the manufacture of weapons of mass destruction to be a war crime.

I can't ever do justice to what he said, but his declaration of God's preferential option for the poor, and for other marginalized peoples, made me think about those of us who don't quite fit. What do we do? I do understand I face discrimination, but I also know I am a citizen of a powerful country. I have a home. I live in the U.S. I have access to education. Perhaps for those of us who aren't victims, it is our call as Christians to be accountable to victims and victim theology.

I am also noticing that the WCC tries much harder to integrate (intentionally) participants who are youth and who are disabled (or differently abled).

After the plenary was committee meetings. I met with my committee (Programme Guidelines) for the first time. Our task was outlined. Basically, it's lots of work. We are going to be determining the programmatic work (or at least the categories of work) for the WCC until the next assembly eight years from now. I sat next to a delegate from Belarus, who, as it turns out, graduated with a certificate from the same seminary where I got my M.Div. Also, my sub-committee work involves unity.

Now, unity is not exactly my thing. I have never really cared about unity. I'm much more concerned about other things. But reading through these documents has really made me ponder unity. Unity is a really great tool for making change. It also has significance for the witness of the church to the gospel. I'm suddenly intrigued. We'll see how this goes.

After committees, then business plenary. I noticed this is hanging above the table where the PC(USA) delegation sits. 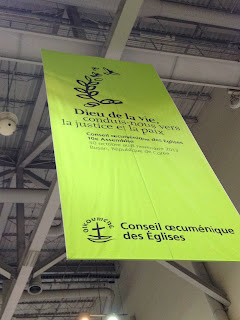 This is why I'm tired. I'm still not done telling you about my meetings.

I confirmed I'm going to worship at a local church on Sunday morning between epic committee meetings. Then we had regional meetings. Here's the one I went to. 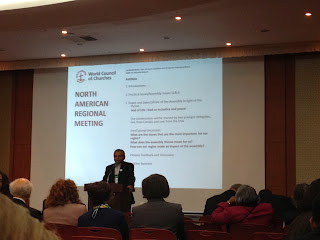 It was kind of fun to gather with folks, and begin to discuss the concerns specific to our region. A couple of us in our small group recalled the words of a young adult steward from yesterday. He's from Fiji, and he said that while in the Pacific they are the least contributors to climate change, they are the most impacted. Other concerns were racism, particularly the needs to reconcile with First Nations communities, discrimination against migrants, and incarceration rates of men of color; ecological concerns in regards to consumption and our use of mines and questionable manufacturing and mining in other countries; as well as other diverse concerns. Many of us are concerned with our capacity to listen to the church in other parts of the world, because we in North America tend to take up A LOT of airtime.

And then (did you think I was done???), the PC(USA) group headed out for a delicious dinner. There might have been 30 of us, or more. We sat and ate, heard from people who have been engaging in WCC work leading up to the assembly (Dr. Rebecca Todd Peters, Dr. Elizabeth Hinson-Hasty, Dr. Emily Welty, and Raafat Girgis), and had discussion at our tables about how we might take the events and learnings back to the PC(USA). 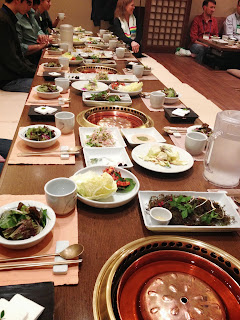 I am officially DONE. I think my colleagues are getting used to me leaving our late-night events suddenly. I mean, seriously, at 10:15pm, I so need to just go to my room, because I often have other work to do, including blogging!

Ok, day 3 is coming up tomorrow, so I'm going to bed. Carry on, good people. Carry on.