Here's the day's round-up:
Linda Valentine, the Executive Director of the Presbyterian Mission Agency, invited me to come along for breakfast with the four Young Adult Volunteers serving in Korea with the Presbyterian Church (USA), and their site coordinators. The site coordinators, Kurt Esslinger and HyeYoung Lee, are friends of mine from seminary. I got to spend some quality time with their son, Sahn, who I met (outside the womb, in person) for the first time. 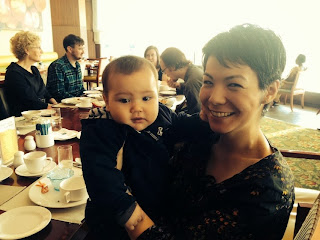 I enjoyed meeting the young adult volunteers, and also enjoyed finding out that the hotel buffet has special plates for kids - Hello Kitty tray-style plates. My nieces would love that.

I was determined to take the subway, in part because the shuttles between the hotels and Bexco, the venue, get very crowded, but also because I have a strong streak of independence regarding transportation. I love figuring out how to get places all on my own. A couple of my colleagues came along with me. It's just a few blocks to the subway, then three stops later we're at Bexco. On our way to the subway, we saw this truck of persimmons... I guess it's a fall fruit! 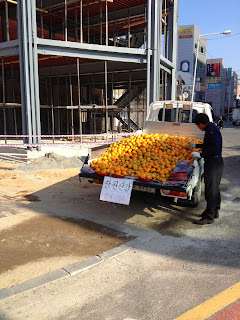 Upon our arrival at Bexco, I ran into a class from Columbia Seminary that includes Dave Vandermeer, the Director of Music Ministries at the church I attend in Atlanta (Central Presbyterian). He's amazing, and it was fun to see him.

We headed over to opening prayer (so you figured out I skipped the orientation, but since I read all the materials, I think I have it mostly covered). I learned that one reason the WCC has prayer instead of worship is because not all the member communions and partners and guests are allowed to worship with other traditions. Opening prayer was powerful. Also wordy. This gives me pause for all the times I have planned worship to be very wordy (and mostly confessional). But the words were also very representative of the various regions of the world represented here. And the music was awesome. 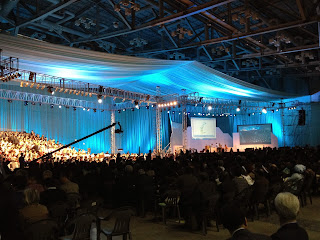 Next up: Lunch. Yes. All-important food. I sat with two of the other PC(USA) delegates (Sara Lisherness and Gradye Parsons), a UMC pastor who has been attending WCC GAs for years, and a Presbyterian minister attending with him. 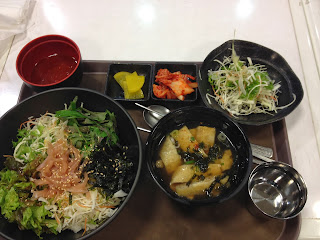 I got in the habit of taking pictures of my food after traveling in Puerto Rico with my friend HyeYoung (now one of the site coordinators for the YAV program in Korea, mentioned above) and several other McCormick friends. Here you go.

Then it was opening plenary. We heard from the mayor of Busan, the moderator of the WCC, the secretary general of the WCC, and many other dignitaries. Then the Korean churches made a presentation that was the history of the Christian church in Korea through today. It was beautiful. Well-done.

I do have to admit I spent the first several minutes squirming. Korean churches are not like other churches in Asia, like those in Iraq or in India that have existed since the time of the early church, because they are the result of missionary outreach from Europe and North America. Now, Korea sends more missionaries than the U.S. to other parts of the world, but I felt so uncomfortable seeing the faces and names of white missionaries scrolling across the screen, and hearing to how these missionaries brought the light of the Gospel to Korea.

Here's the thing. It's pretty much technically true. Historically accurate. The Presbyterians especially sent many missionaries. 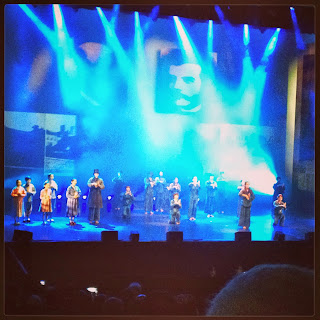 That era was so rife with cultural imperialism that it has tainted my overall impression of missionary work. I am proud that Presbyterians had a tendency to establish schools and hospitals, and that women who were unable to serve as ministers in their countries of origin were able to live out calls to ministry in other countries. But this is all so problematic. What I do love is that Korean Christianity has fully taken on a life of its own, with charismatic, Pentecostal, and liberationist church expressions.

We headed from there into business sessions. 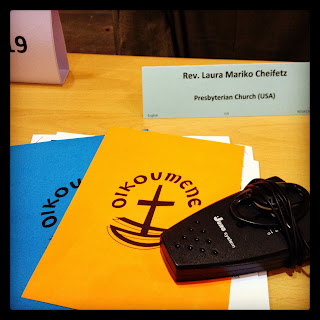 The WCC operates by consensus; thus the orange and blue cards. Orange means I'm feeling warm toward a motion, and blue means I'm feeling cool about it (and need to keep talking). The WCC GA isn't quite the same as a Presbyterian or Disciples or Lutheran assembly (yeah, I've been to those national meetings before... church geek alert...), so it was helpful to learn. The Presbyterians are sitting behind the Orthodox churches, and I learned there is an Orthodox church in Japan.

After business sessions was evening prayer. And then we went to dinner.

We had forgotten about this dinner. The PROK (one of the Presbyterian denominations in Korea) is hosting its partners in the evenings. I was so happy to see their ecumenical officer, Min Heui (I forget her family name). She was one of my guides the last time I was in Korea, and she is a force to be reckoned with. Many of my seminary classmates were PROK-affiliated, so it was really fun to sit down with many of the leaders of this denomination, which is quite close to my own in its affirmation of women's leadership, and some of its social and theological policies. We attended with representatives of Reformed or Presbyterian churches in eastern Africa, Switzerland, and Indonesia.

I ate meat at this dinner. I don't usually eat meat, but when it's offered, I try not to turn it down. I also tried to eat everything. This didn't turn out well for me. I gave up. But it was wonderful hospitality, and we are gifting the leaders two special gift editions of the new Presbyterian hymnal ("Glory to God").

I need to sleep. Because I have breakfast at 7am with more friends and colleagues. G'night.