January 04, 2017
Have you ever been in a space where people speak movingly about the faith of their grandmothers? I always think, “oh, that’s interesting you have Christian grandmothers who talk about their faith.”

My two paternal grandmothers were secular Jews. I saw convictions, not religious practice. My maternal grandmother was Presbyterian, but she certainly didn’t talk about it with me. I saw her actions more than anything else.

Yuriko Nishita, my maternal grandmother and my last living grandparent, lived among us from January 31, 1926 to November 29th, 2016.

I do not have all the facts about my grandmother, and I may have gotten some of the details wrong. What I do possess is my experience of her.

She loved me and made sure I knew it, and she was salty. Whoever came up with the stereotype that Asian American women are meek and quiet probably never met anyone in my family. Over half of the women have (or had) sharp tongues.

In 2010, I told her I had gotten a new job in Atlanta after years in New York and Chicago. I was so excited, because that job was a great opportunity. She said, “Aren’t there any jobs in California?” When I got a job in Kentucky, I told her at least it was further west than Georgia.

I tried to hold her elbow once as she walked to lunch with me and my partner. She snapped, with a smile, “I’m not that frail.” I let go.

Here’s one of my favorite photos of her. 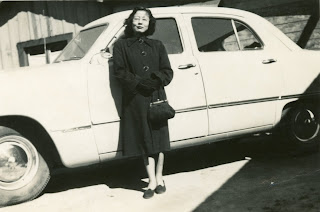 She was a California girl, born and raised. She was Nisei, the second generation of Japanese Americans in the U.S. Her biological father died when she was very young, and her mother’s new husband didn’t want to have to raise so many children, so my grandmother was given to an older, very loving, childless couple to raise. Her adoptive mother died when she was still quite young. The only years she lived outside of California were her teenage years spent in the World War II concentration camp for people of Japanese descent in Topaz, Utah.

As a young woman, she went to Oakland and worked for her room and board, wanting to be in the city instead of on the farm. She didn’t attend a four-year college, but all five of her daughters did (Cal Berkeley, by the way, being the only acceptable school, so I believe I was among the first to disappoint the family in that regard). She traveled the world with my grandfather, who worked internationally as a landscape architect.

Here’s a really cool photo of the two of them somewhere in Europe. Look at those two, all up in the nature in the middle of some architecturally spectacular town square. 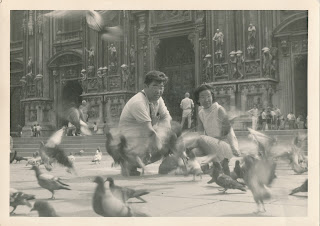 She spoke in the plural “we” for as long as I could remember, on behalf of herself and my grandfather. I used to think it was about patriarchy, but now I think it was more than that. It was about her identity. We. Collective.

She experienced a lot of death and displacement in her early life. And in turn, her life taught me gaman (George Takei’s musical “Allegiance” has a song named “Gaman”). I know, I’m dramatic, but I have my own capacity to suck it up and endure. She survived breast cancer, and the second time cancer showed up, she lived far beyond what I had anticipated. She once said, “I might surprise you.” She usually did.

When she met my partner for the first time (who is Puerto Rican), I was slightly nervous. My grandmother smiled, shook hands, and spoke words of greeting in perfect Spanish, surprising every one of us. (I mean, what the hell? Who knew she spoke Spanish?)

My grandmother, for all my small disagreements with her, was a loving, deeply pragmatic, Japanese American woman, who believed in art, nature, beauty, hospitality, tea, gay rights, civil rights, and keeping up with the news. She didn’t coddle your feelings, even as she was kind and generous.

I’m not the kind of Christian who learned about prayer, hymns, service in the church, or Sunday School from my grandmothers. I learned being a Christian (or a Jew or a Buddhist) doesn’t solve your problems for you, when your problems are caused by structural oppression and discrimination. I learned that people should have convictions. I learned from all my grandparents to feed people, and to sometimes feed them a lot. I learned that anxiety about God is overrated. I learned that art and beauty matter. I learned education is the priority. I learned we are more than individuals.

I learned to use my sharp tongue in love. So here it is: I’m terribly disappointed my grandmother lived to see the election to the office of President of the United States someone who threatened to bring back internment camps for Muslims, many of whose supporters believe the Japanese American internment camps were a good idea.

In honor of my grandparents (and perhaps in honor of the work yours did or the indignities they suffered, too), let's not repeat history. No person of any age, race, ethnicity, or religion deserves to be put in a camp to satisfy American bigotry thinly veiled under the guise of security (something that is unsupported by intelligence). This happened after Pearl Harbor, after the attacks of 9/11, and we live on the verge of it happening again.

My family might be college educated and relatively assimilated, but I still see the material and psychological impact internment had on us, even two generations removed.

I owe her. We owe them. So buck up, kids. We have four years to fight like hell in honor of our grandmothers because we were loved and we love (and even if we don’t really love each other, we are bound to each other anyway). We need each other. We are more than individuals. We. Collective.